We follow a globally recognised high-reliability test procedure for thermal shock which is called out by methods described in military standards MIL-STD-883K and MIL-STD-202H.  Our air-to-air thermal test chamber is specifically designed to perform all tests required by these two standard and achieves a rapid rate of change in the air temperature due to the elevator mechanism employed.

See below operational compliance to MIL-STD-883 and MIL-STD-202. 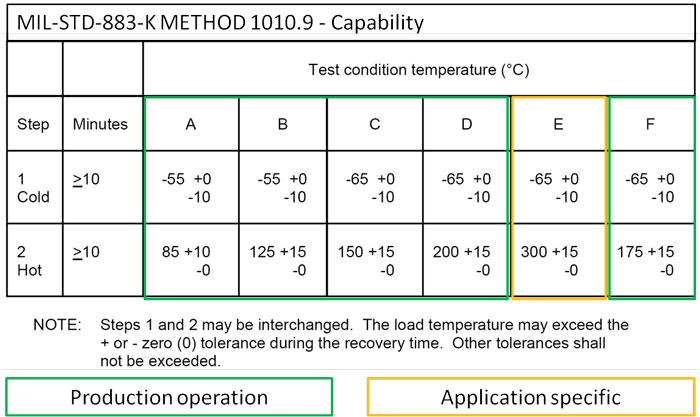 Component samples we test against Mil-STD-883 Method 1010.9 are commonly but not exclusively limited to Semiconductors ICs, Discrete devices, Thick and Thin-film hybrid circuits, Multi-Chip-Modules (MCM), Multi-Chip-Packages (MCP) and any material piece part from which all the latter are formed.

Component samples we test against Mil-STD-202 Method 107 are commonly but not exclusively limited to capacitors, resistors, switches, relays, transformers, inductors, and similar. 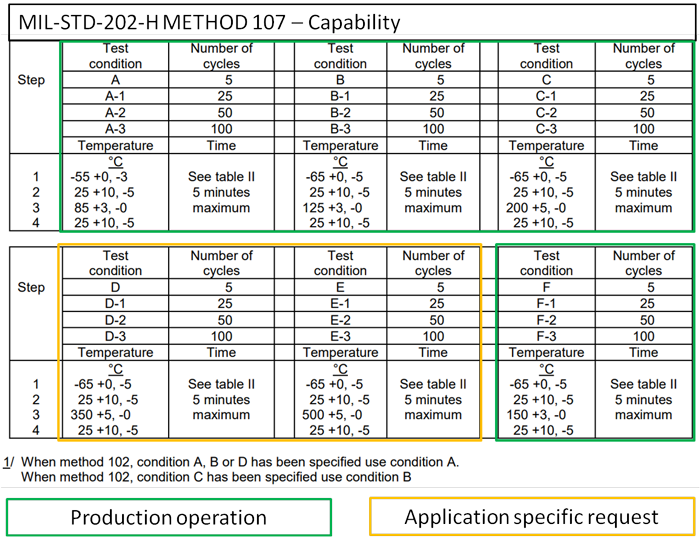 After the test cycle has finished, component casing including leads and seals and also marking is visually inspected.  Where any evidence of mechanical component damage or illegibility of marking may be considered a fail.

After thermal shock components are electrically tested in order to ascertain if the stress applied by thermal shock has induced failure or parametric drift.

Versus thermal shock temperature cycle testing uses slower rates of change between high and low temperatures and is intended to qualify if a component can withstand temperature variation over a longer period of time and longer cycles. The objective is the same as thermal shock, which is to weed out early life fatigue failures.

Each test flow will run for a specific number of cycles and temperature variation and similar to thermal shock, post-cycling the components are visually evaluated and then electrically tested.

For reliability testing or qualification of new devices, 1000 temp cycles are usually performed, with interim visual inspection and electrical test read points at 200X and 500X. 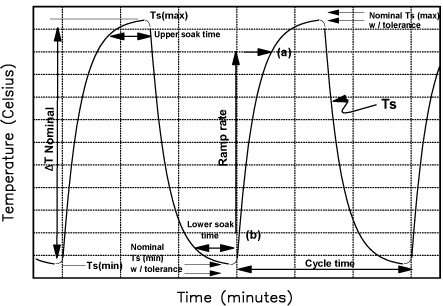 We also perform temperature cycling to other industry standards such as IEC 61300-2-47, JEDEC JESD47E and more….

This website uses cookies to improve your experience while you navigate through the website. Out of these, the cookies that are categorized as necessary are stored on your browser as they are essential for the working of basic functionalities of the website. We also use third-party cookies that help us analyze and understand how you use this website. These cookies will be stored in your browser only with your consent. You also have the option to opt-out of these cookies. But opting out of some of these cookies may affect your browsing experience.
Necessary Always Enabled
Necessary cookies are absolutely essential for the website to function properly. These cookies ensure basic functionalities and security features of the website, anonymously.
Functional
Functional cookies help to perform certain functionalities like sharing the content of the website on social media platforms, collect feedbacks, and other third-party features.
Performance
Performance cookies are used to understand and analyze the key performance indexes of the website which helps in delivering a better user experience for the visitors.
Analytics
Analytical cookies are used to understand how visitors interact with the website. These cookies help provide information on metrics the number of visitors, bounce rate, traffic source, etc.
Advertisement
Advertisement cookies are used to provide visitors with relevant ads and marketing campaigns. These cookies track visitors across websites and collect information to provide customized ads.
Others
Other uncategorized cookies are those that are being analyzed and have not been classified into a category as yet.
SAVE & ACCEPT